Inorganic and organic sulfides are toxic and stinking pollutants even in low levels of concentration.[1] Many industries like oil refineries, petrochemicals, tanneries, kraft paper mills, dyes and pigments, etc., discharge sulfides containing effluents. From the aspect of pollution control, it is necessary to remove sulfides because of their toxicity and unpleasant odor.[2] Sulfide oxidation by air is one of the ways to remove the sulfide. This reaction is very slow at atmospheric pressure and ordinary temperature. The liquid-phase heterogeneous catalytic oxidation of toxic sodium sulfide to safer thiosulfate and sulfate is the most perspective method. The oxidation rate can be accelerated by the presence of transition metals, such as Ni, Mn, Cu, Co, Fe, . . .[3]

Recently, the use of molecular oxygen as terminal oxidant received great attention for both economic and environmental benefits, and many highly efficient systems have been developed for catalytic aerobic sulfide oxidation using rhenium,[4] palladium,[5] ruthenium,[6] copper [7, 8] manganese,[7] iron,[8–10] cobalt [11] and gold-based catalysts.[12] Transition metal phthalocyanines (mainly cobalt phthalocyanine CoPc) are among the most popular and often studied catalysts for sodium sulfide oxidation.[13–15] The majority of the studies, reported in the current literature, have been carried out in a homogeneous phase. Heterogeneous catalysts offer undoubtedly a better technological solution to this problem.A promising group of heterogeneous catalysts are the transition metal oxides, which possess a high activity in the oxidation of gaseous hydrogen sulfide.[16] But these studies are not sufficient both theoretically and experimentally because of the complex dependency of the reaction rate on oxygen and sulfide concentrations as well as on the pH of the liquid. Furthermore, many intermediates and reaction products seem to make this reaction system a very complicated one.

The aim of the present study is to accumulate data on the catalytic activity of a wide range of transition metal oxides and their mixtures deposited on the polymeric matrix in sulfide ion oxidation with air in alkaline aqueous medium. The catalytic mechanism of a heterogeneous multi-component catalyst of transition metal oxides is studied. And in this paper we discuss some factors influencing the rate of sodium sulfide oxidation, such as alkaline concentration and antioxidant, and propose the kinetics of the reaction of sulfide oxidation. The effect of sodium hydroxide concentration on the kinetics of formation of products of sodium sulfide oxidation in the presence of the heterogeneous multi-component oxide catalyst was studied.

The tested catalysts (MnO2, CuO) and some of their characteristics are shown in Table 1. It is shown that the rate of oxidation of sodium sulfide increases: temperature increases up to 600C, the concentration of the catalyst component in the polymer matrix increases from 0 to 10 wt% and the catalyst amount (mass) increases to 5.0 g. Further increases do not influence the rate of reaction. These results determine the necessary temperature and concentration of transition metal oxides in the polymer matrix and catalyst content for a definite reaction.

The catalyst surface of MnO2-10/CuO-10 was investigated by digital microscope (Figure 1) and Fourier spectrometer (IR spectra, Figure 2). It can be seen that the catalyst surface was not changed after three months of use under relatively vigorous reaction conditions (temperature 600C, alkaline concentration 5.0% and a strong rotation of solution 1400 rpm). 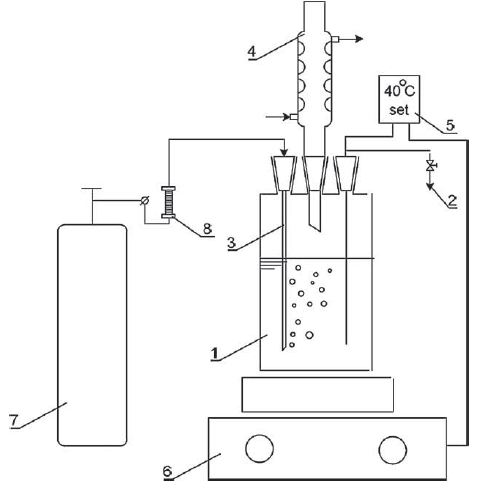 Figure 2. IR spectra of MnO2-10/CuO-10 before reaction and after three months of use.

Investigated results showed that polymeric heterogeneous catalysts of transition metal oxides have high reactivity in a wide range of concentrations of oxidizable compounds and pH, mechanical strength and chemical and hydrolytic stability for three to five years. Polymer-based catalysts can be used under alkaline conditions at temperatures up to 1000C, pressure up to 7.0 kg/cm2.

It is well known that two main types of mechanisms are usually assumed for heterogeneous catalytic reactions, i.e. the so-called Langmuir–Hinshelwood and Rideal-type or Rideal–Eley type mechanisms. In the first case, the reaction is assumed to occur between adsorbed reactant molecules on the catalyst, while in the case of the second mechanism a reactant molecule from the gas phase reacts with another in the adsorbed state.[17] For the heterogeneous oxidation of the sodium sulfide, it is assumed that both oxygen and sulfide ion are adsorbed on the surface of the metal oxide. Adsorbed oxygen may be present as atomic or molecular species with various charges. On transition metal oxides, the most common species are O, O?, O2 and O2?. On some basic alkali and alkaline earth oxides, O22- has been reported. On UV-irradiated TiO2, O3? species has been observed with EPR.[18] Various review articles discussing these and other species such as O3? have appeared in recent years.[19–21] In general, atomic oxygen species are adsorbed more strongly than molecular species. This is because strong surface-atomic oxygen bonds are needed to compensate for the energy required to break the double bond of the oxygen molecule. The rate of dissociative adsorption of oxygen to atomic species is expected to be lower than that of molecular adsorption. This is because a pair of neighboring surface sites must be available for the former process. Otherwise, lattice or surface diffusion of mononuclear oxygen ions (or lattice anion vacancies) is needed before dissociation of the oxygen molecule can be achieved. This is consistent with the fact that a saturation coverage of adsorbed atomic oxygen corresponds to a few atoms per square millimeter of surface. On the other hand, molecular adsorption of oxygen can take place on an isolated surface site. This requirement of the availability of a pair of surface sites can be overcome by sulfide ion S2?, the oxidation of which would leave an atomic oxygen on the surface. Thus, on different surface sites of the catalyst, the reaction can occur by the following mechanism:

Higher oxidation state (+3) is always obtained in this system which explains the high catalytic reactivity of mixtures of transition metal oxides with different oxidation states.

The experimental results shown in Table 2 indicate that this catalyst has high reactivity in the oxidation of all sulfur-containing compounds. In calculating the initial oxidation rate for all experimental runs, it is apparent from Table 2 that the rates of catalyzed reaction are about 3.3, 3.5 and 2.9 times higher than noncatalyzed, corresponding to the oxidation of Na2S, NaSH and ((NH4)2S.

2.2. Investigation of some factors influencing the rate of sodium sulfide oxidation in the presence of a heterogeneous multi-component catalyst of transition metal oxides

In contrast to the homogeneous catalysis by transition metals, it is more difficult to present a general reaction mechanism for the heterogeneously catalyzed oxidation of sodium sulfide, mainly due to the limited information on the adsorption and redox activities of different surface sites. These activities probably depend on the nature of the metal oxide or hydroxide studied.[25] The pH does not show the influence on the rate of adsorption of oxygen on the surface of a heterogeneous catalyst, but it has a significant effect on the rate of adsorption of sulfur compounds and the rate of formation of the complex with sulfur atom.[26] For uncatalyzed reaction, the reaction rate is not influenced by the pH change during the first part of the reaction.[27]

The influence of hydroxyl anions on the oxidation rate of sulfur compounds in the presence of heterogeneous catalysts can be explained as follows:

(1) reduce the number of radicals in the system, which reduces the rate of reaction by increasing concentration of hydroxyl anion;[28]
(2) the hydroxyl ion functioning as a competitive ligand at the metal center, so the rate of complex formation is decreased;[29]
(3) coordinated hydroxyl anion inhibits the rate of recovery of metal ions.[30]

It is known that the heterogeneous polymeric catalyst has a high level of chemical stability, mechanical strength and stable catalytic activity. But a problem appeared when polyethylene was changed by polypropylene as a polymeric carrier: the oxidation rate decreased significantly. Based on this, the influence of the antioxidant (irganox-1010) on the initial rate of sodium sulfide oxidationwas investigated (Figure 4). The rate of sodium sulfide oxidation decreased with increasing antioxidant levels in the polymeric matrix. These results can be explained by the following ways: (1) the antioxidant in a polymer decreased the oxygen consumption and therefore decreased the oxidation rate;[31] (2) antioxidation inhibited electron-transfer processes of transition metal oxides in the polymeric matrix which determines the activity of catalysts or the rate of oxidation of sodium sulfide.[32] 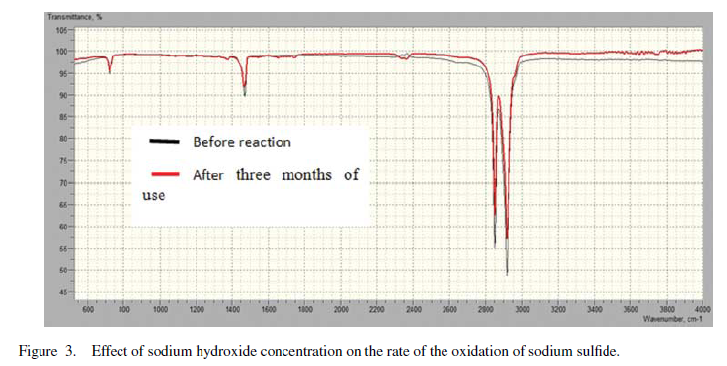 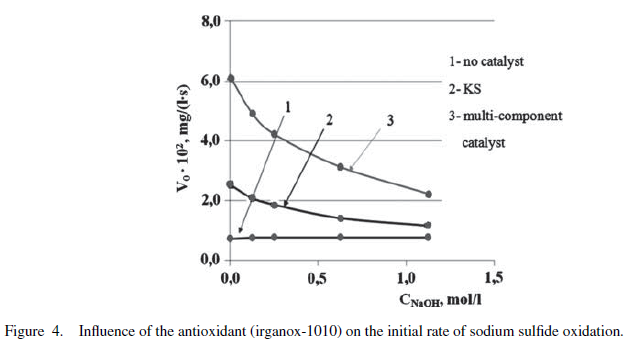 The oxidation process proceeds from Na2S to Na2S2O3, Na2SO3 or Na2SO4 and is expressed by the following equations:

It is known [33] that the reaction of Equation (5) may proceed far more rapidly than that of Equations (3) and (4).As a result, a considerable amount of Na2S2O3 is left in the solution together with Na2SO4, which is the final oxidized product. In a weakly alkaline medium (pH ? 12.5), thiosulfate is rapidly oxidized by the presence of a multi-component catalyst. As can be seen from Figure 5, the initial time of the reaction to 70% of sodium sulfide is oxidized to thiosulfate. Thiosulfate and sulfite were not oxidized until the complete disappearance of sodium sulfide in the solution, then its concentration is decreased and the concentration of the final product (sodium sulfate) is increased. 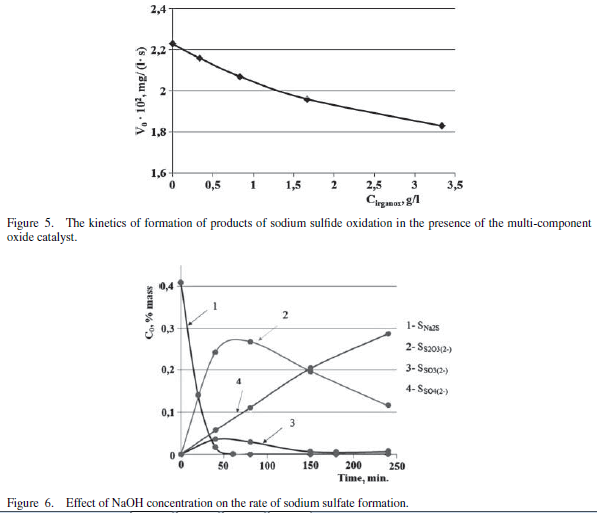 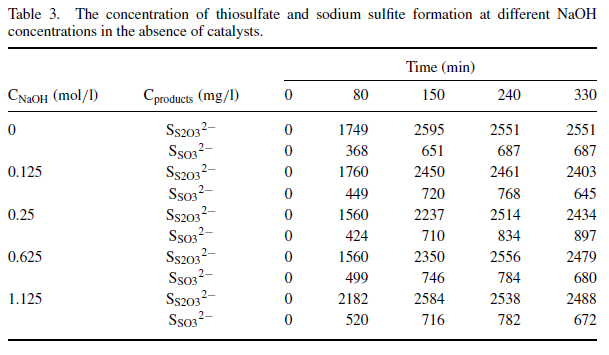 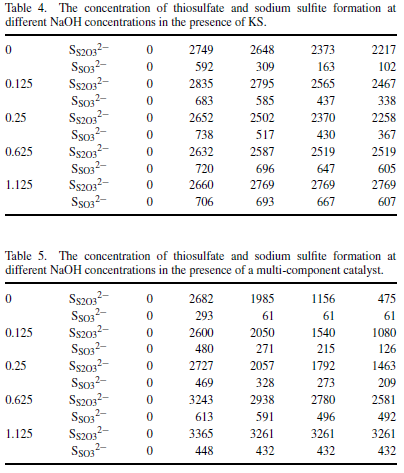 In addition, at a NaOH concentration of 1.125 mol/l, the rate of sulfate formation in the presence of a heterogeneous multi-oxide catalyst even lowers the rate of sulfate formation in the absence of catalysts. The investigation results (Tables 3–5) show that the thiosulfate concentration in the system is increased sharply at the initial time of the oxidation reaction of sodium sulfide. The concentration of sodium sulfite formed was 5–10 times lower in comparison with sodium thiosulfate, which is explained by the higher rate of oxidation of sulfite to sulfate. 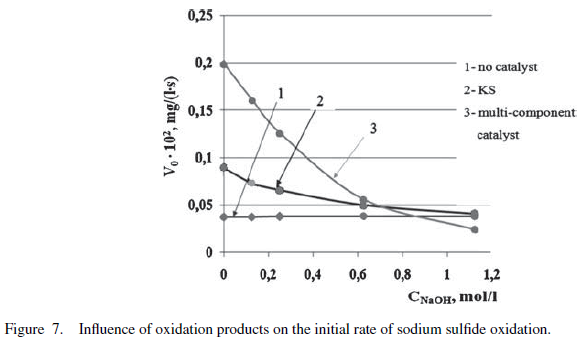 Investigation of factors influencing the oxidation rate led to the following results: (1) a high oxidation rate is observed with respect to the weakly alkaline solution; (2) the antioxidant (irganox-1010) inhibited the oxidation rate and (3) the combined action of all oxidation products had no influence on the reaction rate. 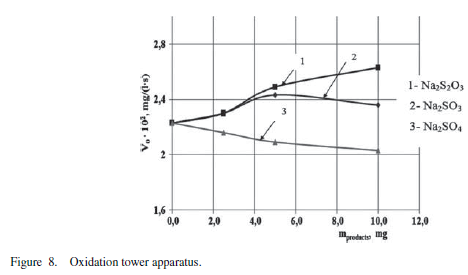 Laboratory samples of the heterogeneous catalysts were prepared by roll-mixing the catalytically reactive component (transition metal oxides or phthalocyanine cobalt) with the molten polymer at 1500C until a uniform mass was obtained, after which shavings with a thickness of 0.25mm were formed (specific surface area of about 150 cm2/g). These catalysts can be prepared in the form of granules (particle size 2 ? 2 ? 2 mm), with the same equipment used to obtain carbon black concentrates or dye concentrates in polyethylene or polypropylene production. Packing elements can be prepared from the catalyst granules in casting machines.[35] The metal oxide content, expressed as wt.% of metal oxide in the catalyst samples, was determined by means of chemical analysis (example CuO-5 – the heterogeneous catalyst contains 5.0% cuprum oxide by mass). After washing the catalyst with distilled water for 10 h at 600C, it was used in labs for testing.

The catalysts based on copper and manganese oxides (MnO2, CuO) were used for testing. Characterization of the catalyst surface before and after three months of use was done by digital microscope (Keyence-VH-Z500R) and Fourier spectrometer (Infralium-FT-08).

[8] Firouzabadi H, Iranpour N, Zolfigol MA. Selective and effcient transformation of thioethers to their sulfoxides and catalytic conversion of thiols to the disulfides with hydrate iron (III) and copper (II) nitrates in aprotic organic solvents or under solvent free conditions. Syn Commun. 1998;28:1179–1187.

[17] Anatoli AD, Marshneva VI, ShepotkoML. Metal oxides in hydrogen sulfide oxidation by oxygen and sulfur dioxide I. The comparison study of the catalytic activity. Mechanism of the interactions between H2S and SO2 on some oxides. J Adv Catal. 1982;31:77–133.

[33] Ueno Y, Williams A, Murry FE. A new method for sodium sulfide 374 removal from an aqueous solution and application to industrial wastewater and sludge.Water, Air and Soil Pollut. 1979;11:23–42. 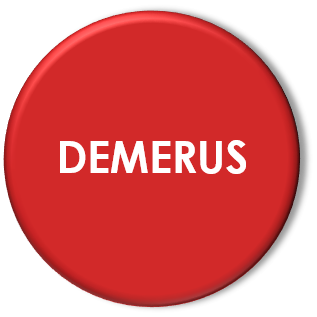 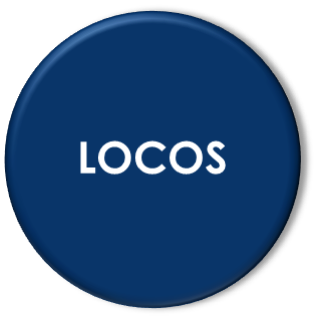 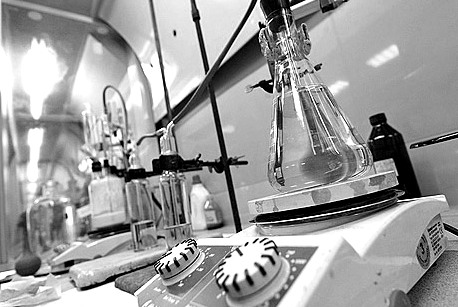 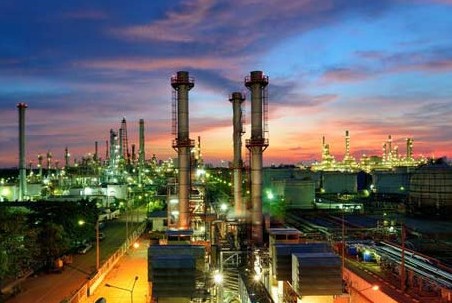