CATALYTIC OXIDATION OF AQUEOUS SULFIDE IN THE PRESENCE OF 3,3′,5,5′-TETRA-TERT-BUTYL-4,4′-STILBENEQUINONE

Oil refinery wastewater is potential contributor to groundwater and surface water contamination. The wastewater in the refineries arising from various processes (such as pyrolysis oil, amine gas treating, alkalization of the crude oil) containing large quantities of sulfide sulfur is called sulfur-alkaline wastes (SAW) that is classified as hazardous material. The strength of this wastewater in terms of chemical oxygen demand is significantly high. The majority of chemical oxygen demand for SAW is from inorganic sulfides, with 2000 mg L-1 of sulfide concentrations [1]. The treatment of SAW in now an urgent environmental problem that demands immediate attention. Many methods have been applied for treating wastewater containing inorganic sulfides. At low sulfide concentrations, its detoxification process can be carried out by bacteriological oxidation. Nevertheless, at concentrations exceeding 70 mg L-1 the bacterial metabolism of sulfide is suppressed [2]. In this case, the chemical oxidation methods are the most widely used in industry to treat this wastewater, whereby the inorganic sulfide will be oxidized to form sulfate by air or pure oxygen in the presence of catalysts. Numerous catalyst types have been developed for sulfide oxidation, in which the transition metals and their compounds are the most commonly known. Metal oxide such as TiO2, MnO2, Cr2O3, Fe2O3, V2O5, CuO supported on the polymeric matrix are considered as the potential catalysts for sulfide oxidation, which exhibit high efficiency over a wide range of sulfide concentrations and pH levels [3-6]. Similarly, the transition metalphthalocyanines and chalcogenides (Co, Cd, V, Mo, Ni, etc.) are among the most popular and usually studied catalysts for sulfide-removal in industrial practice [7-9]. Among the different metal catalysts, the spinel structured iron oxides such as MFe2O4 (where M = Cu2+, Co2+, Ni2+, Mn2+), magnetite, maghemite as well as the chelated iron compounds revealed promising catalytic activity towards sulfide treatment [10-12]. The main disadvantage of using these catalysts are the release of heavy metals into the environment.
The modified carbon based on materials such as activated carbon, graphite and graphene have attracted much interest in recent years as promising catalysts in sulfide treatment [13-15]. The inert metal (Pt and Pd) modified activated carbon [16] and pyrolysed carbon supported cobalt porphyrin [17] as well as microorganisms supported on activated carbon [18] have also been proposed for sulfide oxidation. However, the high cost of these materials and the complex synthesis process as well as the blockage of active sites of carbon catalyst by sulfide oxidation products in the long run hinder their industrial application.
The quinones and their derivatives represent another class of powerful catalysts for sulfide oxidation, which have been applied commercially to a wide variety for sulfide removal applications in the UK and Japan Petrochemical Industry as well as in the United States. Highly efficient application of quinones as catalyst for sulfide sulfur oxidation would avoid the problems of existing processes mentioned above. Many authors [20-24] have investigated the catalytic oxidation of sulfide sulfur in the presence of quinones. It has been reported by Robert A.D [20] that the naphthoquinone complexes effectively accelerate the sulfide oxidation in both the Hiperion process and the Takahax process (used widely in Japan for treating refinery gas streams and digester biogas). Ueno H. [21] has been also argued that 1,4-naphthoquinone, 1,2-naphthoquinone-4-sulfonic acid sodium salt as well as hydroquinone have high activity in the catalytic sulfide oxidation of industrial wastewater. The shortcomings of these catalysts are high catalyst losses, complexity of catalyst separation and recovery after wastewater treatment. Surveys such as that conducted by Iwasawa [22] have shown that the polynaphthoquinone possessed a high catalytic efficiency for sulfide oxidation. However, during the course of sulfide oxidation, the formed sulfur was deposited on the surface of the polynaphthoquinone catalyst, and this led to a decrease in its activity.
To overcome the above-mentioned disadvantages, as quinone-catalyst we present a new 3,3′,5,5′-tetra-tert-butyl-4,4′- stilbenequinone that exhibits the high catalytic activity and stability towards the sulfide oxidation in concentrated alkaline media. The kerosene fraction has been used as catalyst carrier due to its low aqueous solubility and low volatility as well as satisfactory solubility of stilbenequinone. The main purpose of this study is to develop an understanding of catalytic efficiency of the stilbenequinone in the liquid-phase sulfide oxidation and attempt to apply it to industrial wastewater.

Catalyst Synthesis: The catalytic component — 3,3′,5,5′-tetra-tert-butyl-4,4′-stilbenequinone (C30H42O2) was prepared by the oxidation of 2,6-di-tert-butyl-4-methylphenol with hydrogen peroxide in the presence of a potassium iodide-based catalyst (Scheme 1) as decried in [ 25, 26].
Reagents. In our experiments, all the reagents were analytical grade and used without further purification. Kerosene fraction (Russia, GOST 10227-2013), AgNO3 (Russia, GOST 1277-75), FeSO4×7H2O (Russia, GOST 6981-94), technical gaseous oxygen in cylinders (Russia, GOST 5583-78). Aqueous sulfide solutions were prepared by dissolving appropriate amounts of reagent grade Na2S×9H2O (Russia, GOST 2063-77) in distilled water. A solution of sodium hydrosulfide was prepared according to the procedure used by James [27].
Catalytic oxidation of sulfide sulfur. The catalytic oxidation of inorganic sulfides was implemented in a 150 cm3 three-necked cylindrical glass reactor. A glass reactor was used to avoid any contact of the stock sulfide solution with metals, which would accelerate the sulfide oxidation. The reaction mixture containing 40 cm3 of an aqueous inorganic sulfide solution and 20 cm3 of a kerosene fraction was loaded into the reactor in the presence of certain amount of the catalyst component. The oxygen from the cylinder was continuously injected into the reaction solution at 0-13 L h -1. The reaction solution was stirred at speed of 500-1400 rpm and its temperature was maintained in the range of 50-90 °C by a thermally controlled magnetic stirrer at atmospheric pressure.
Experimental-analytical methods. The quantitative content of sulfide was measured by potentiometric titration with AgNO3 in accordance with UOP-209-00 (USA). The concentrations of thiosulfate and sulfite as well as of hydrogen peroxide were determined by the idometry described in [28,29]. Meanwhile, the concentration of sodium sulfate was determined by the spectrophotometric method [28].

— Recent research has provided a more complete understanding of the catalytic process occurring during the sulfide oxidation in the presence a stilbenequinone based oxidation-reduction catalyst. In this case, the sulfide sulfur can be oxidized, not only by stilbenequinone and oxygen but also by the active oxygen forms which formed in process of catalyst regeneration.
— The laboratory test has been demonstrated that the stilbenequinone can be used for treating industrial wastewater containing sulfide sulfur.
— It has also been shown that the combination of stilbenequinone with iron (II) salt leads to a significant increase in catalytic oxidation rate of sulfide. 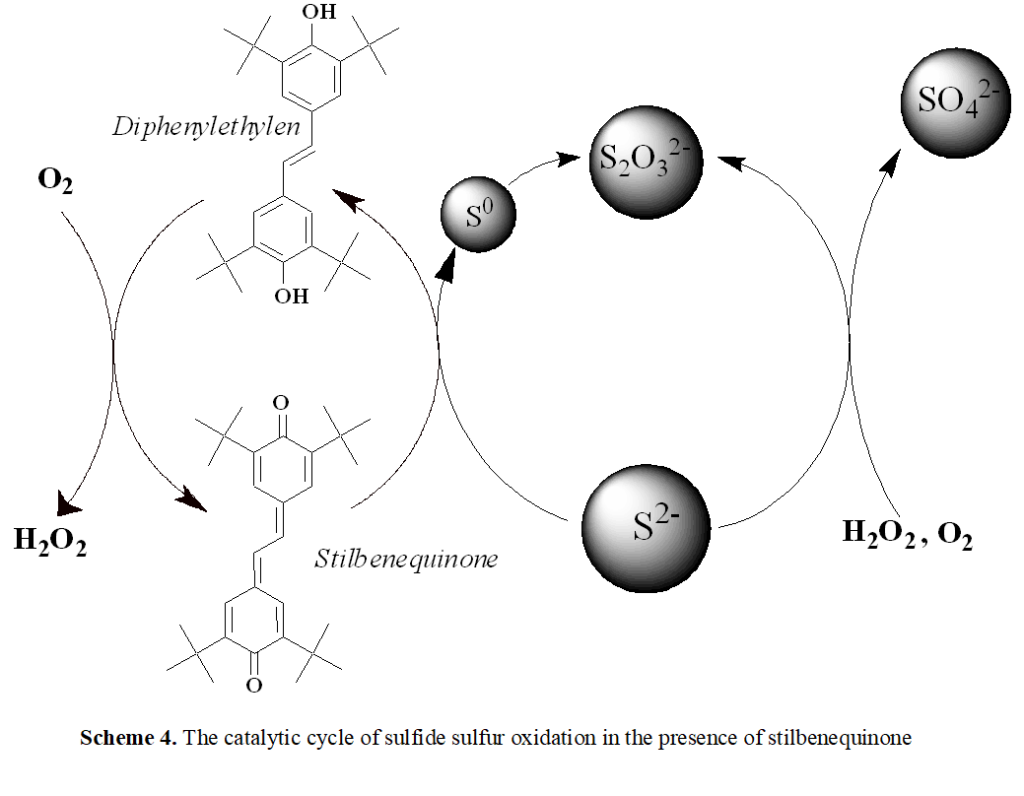 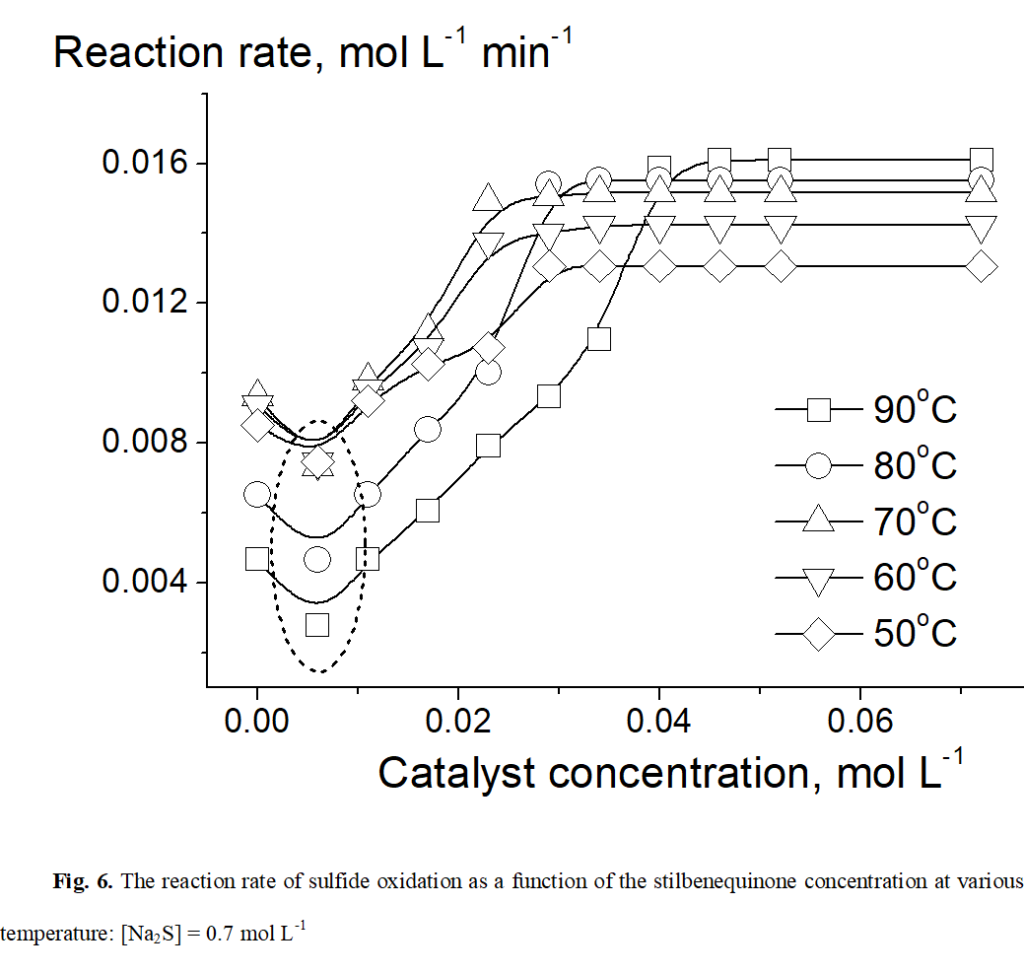