A CATALYST BASED ON 3,3′,5,5′-TETRA-TERT-BUTYL-4,4′-STILBENEQUINONE USED IN THE LIQUID-PHASE OXIDATION OF SODIUM SULFIDE

Ахмадуллины: Наука и ТехнологииA CATALYST BASED ON 3,3′,5,5′-TETRA-TERT-BUTYL-4,4′-STILBENEQUINONE USED IN THE LIQUID-PHASE OXIDATION OF SODIUM SULFIDE

Industrial wastes from oil refinery and petrochemical industries, characterized by the presence of inorganic sulfur-containing pollutants such as sulfides, thiosulfates, sulfates and elemental sulfur, are held responsible for their high toxicity. The most fatal element of wastewater is sulfide sulfur, a toxin which causes severe damage to aquatic life [1]. Therefore, the removal of sulfide sulfur from aqueous media has been investigated using different methods such as adsorption, precipitation, electrochemical or biological methods [2]. Noticeably, chemical oxidation methods are most widely used to get rid of sulfide sulfur in wastewater since sulfide reacts with strong oxidizing agents (for instance, KMnO4, K2Cr2O7, O3, Ca(Cl)2O2, H2O2 and Cl2) to form sulfate. However, the cost of the chemicals and the pollution possibly caused by the oxidation agents are several disadvantages to consider [3-7].
As shown by previous studies [4-17], the most effective method of sulfide sulfur treatment in the wastewater involves its oxidation in an atmospheric oxygen in the presence of a catalyst. Several heterogeneous and homogeneous catalysts have been employed to catalyze the reaction between toxic sulfide and oxygen, forming less harmful sulfur compounds such as thiosulfate and sulfate. Transition metals and their compounds are also considered as the potential catalysts for selective oxidation of sulfide in a variety of industries. For example, metal oxides such as Fe2O3, CuO, Cr2O3, MnO2 supported on polymer matrix are extensively used for sulfide oxidation in wastewater refinery [4]. Similarly, polymeric metal phthalocyanines and cobalt phthalocyanine sulfonates coordinately bound to polymers are also applied to oxidizing sulfides [6]. Spinel-structured iron oxides such as ferrit MFe2O4 (M= Cu2+ and Co2+), magnetite (Fe3O4) and maghemite (Fe2O3) are also employed to catalyze sulfide oxidation [7]. Lastly, vanadium antimonate VSbO4 [8,9] and metal chalogenides (CdS) [10] are used as catalysts for oxidizing sulfides. However, it is seen that in these methods, toxic substances of the catalysts, which are heavy metals, will partly dissolve in wastewater. In terms of financial issues, the removal of these compounds from wastewater during sulfide treatments can be very expensive. For these reasons, the development of an optimal and non-toxic catalyst for treating the sulfide-containing wastewater is critically important.
On another note, non-toxic and economical catalysts based on quinone-compounds such as 1,4-naphthoquinone, 1,2-naphthoquinone-4-sulfonic acid sodium salt, polynaphthoquinone, benzoquinone, duroquinone have been recently applied to sulfide sulfur purification, particularly in Petrochemical Industry of both Japan and the UK. However, the disadvantages of these catalysts include low catalytic activity, high catalyst losses and the complexity of the catalyst separation after oxidative treatments [11-16]. With the view to overcoming these drawbacks, we propose a new quinone-catalyst based on 3,3′,5,5′-tetra-tert-butyl-4,4′-stilbenequinone (hereinafter referred to as stilbenequinone or С30H42O2) that performs high catalytic activity, selectivity and stability in alkaline media. A straight-run kerosene fraction is used as the catalyst carrier owing to its low solubility in water [17] and its high boiling point [18]. Furthermore, the good solubility of the catalyst in this kerosene fraction is taken into account. Consequently, the losses of the catalyst and its carrier during purification can be minimized.
The purpose of the present work is to establish a mechanism and kinetics of liquid-phase catalytic oxidation of sulfide sulfur in the presence of stilbenequinone.
Experimental Section
The catalyst component — 3,3′,5,5′-tetra-tert-butyl-4,4′-stilbenequinone (С30H42O2) was synthesized as the procedure described in [19].
All the chemicals used in the experiments were reagent grade, including sodium sulfide (GOST 2053-77), technical gaseous oxygen in cylinders (GOST 5583-78) and kerosene fraction (GOST 10227-2013). The initial sodium sulfide concentration was varied from the range of 0.097 to 0.714 mol L-1 by dissolving an adequate amount of Na2S.9H2O (Russia, GOST 2063-77) in deoxygenated distilled water.
The catalytic oxidation of inorganic sulfide was performed inside a 150 mL of three-neck-round-bottom flask. The mixture of sodium sulfide solution with its concentration of 0.143 mol L-1 – 0.714 mol L-1 and kerosene fraction, whose volumes were 40 mL and 20 mL respectively, was loaded into the reactor in the presence of a certain amount of the catalyst component. The reaction mixture was magnetically stirred at a constant speed of 500-1400 rpm. The oxygen from the cylinder was injected into the reaction mixture at 0 – 13 L h-1. The reaction temperature was maintained in the range of 50°C to 90°C by a thermally controlled magnetic stirrer.
The oxidation of inorganic sulfides by stilbenequinone was implemented in an inert atmosphere in a steel autoclave (150 mL) by using 40 mL of sodium sulfide solution with insignificant concentraton (0.097 mol L-1) and 20 mL of kerosene in the presence of an excessive amount of stilbenequinone (0.373 mol L-1). The reaction temperature varied from 50°C to 110 °C and the constant stirring was set at 1400 rpm in all experiments. Using a low concentration of inorganic sulfide and an excess of the stilbenequinone, this reaction is guaranteed to occur completely.
The quantitative content of sodium sulfide was identified by potentiometric titration method which was in accordance with UOP-209-00 (USA). Meanwhile, the sodium sulfate concentration was established by using spectrophotometry (Eros PE5300B, regime A, wavelength l=450 nm, path length L=50.0 mm) [20]. The concentrations of hydrogen peroxide concentration, as well as of thiosulfate and sulfite were measured by iodometry [21]. Infrared spectra (IR) of substances were recorded on the Perkin Elmer Spectrum Two FT-IR spectrometer. Melting point of substances were determined in open glass capillary tubes on a Buchi M-560 instrument. The concentration of 3,3′,5,5′-tetra-tert-butyl-4,4′-stilbenequinone was ascertained by spectrophotometry (Eros PE5300B, regime A, wavelength λ =500 nm, path length L=10.0mm).

In summary, the kinetics of aqueous sulfide oxidation in the presence of stilbenequinone-based catalyst has been presented as a first-order reaction with respect to sulfide sulfur, oxygen and catalyst. It is concluded that stilbenequinone plays a crucial role in transferring electrons from the reducing agent (i.e. sulfide) to the oxidants (such as oxygen and hydrogen peroxide). It has been proved that the process of catalyst regeneration is the rate-limiting step in the catalytic oxidation of sodium sulfide. The major products of this reaction include thiosulfate and sulfate in which the former is the product of sulfide oxidation by stilbenequinone while the latter is the final product of the oxidation of sulfide and thiosulfate being oxidized by hydrogen peroxide formed during catalyst regeneration. 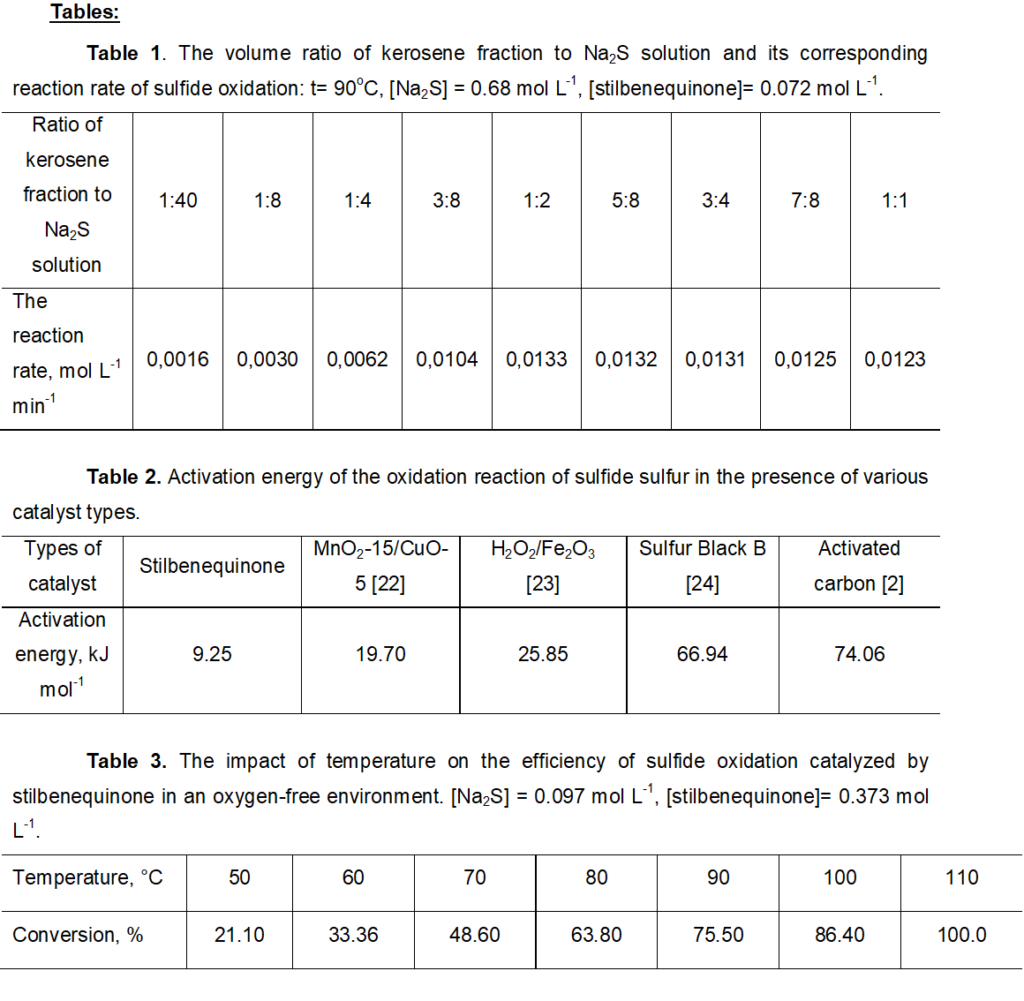 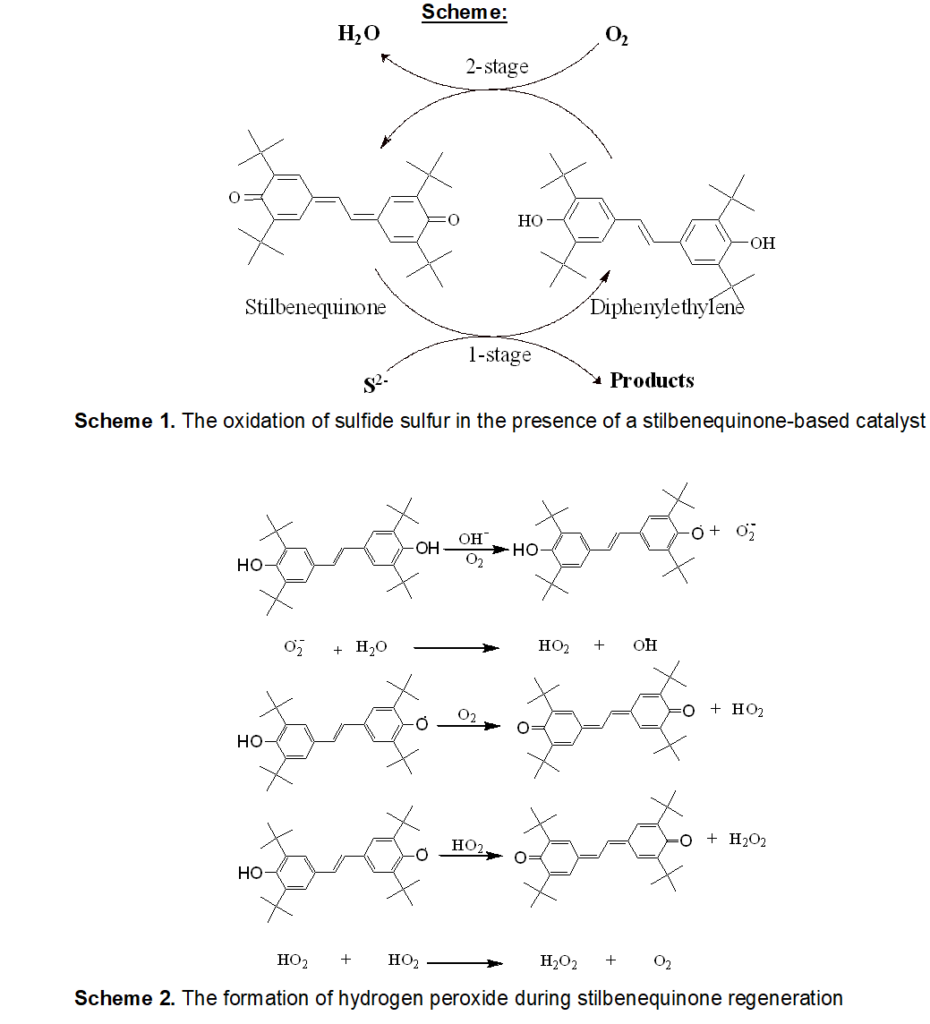 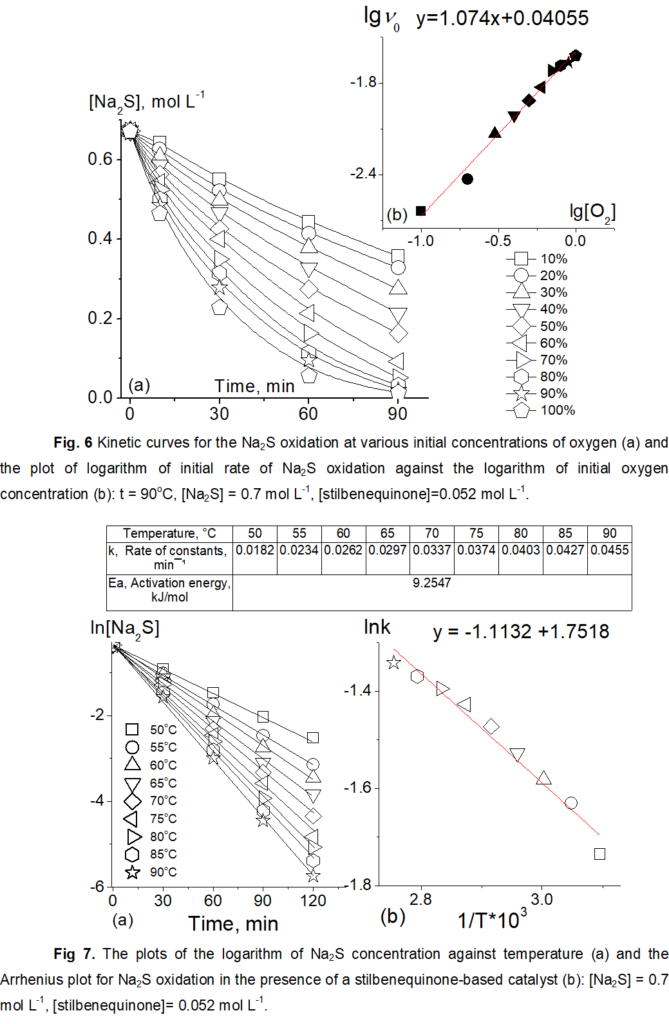 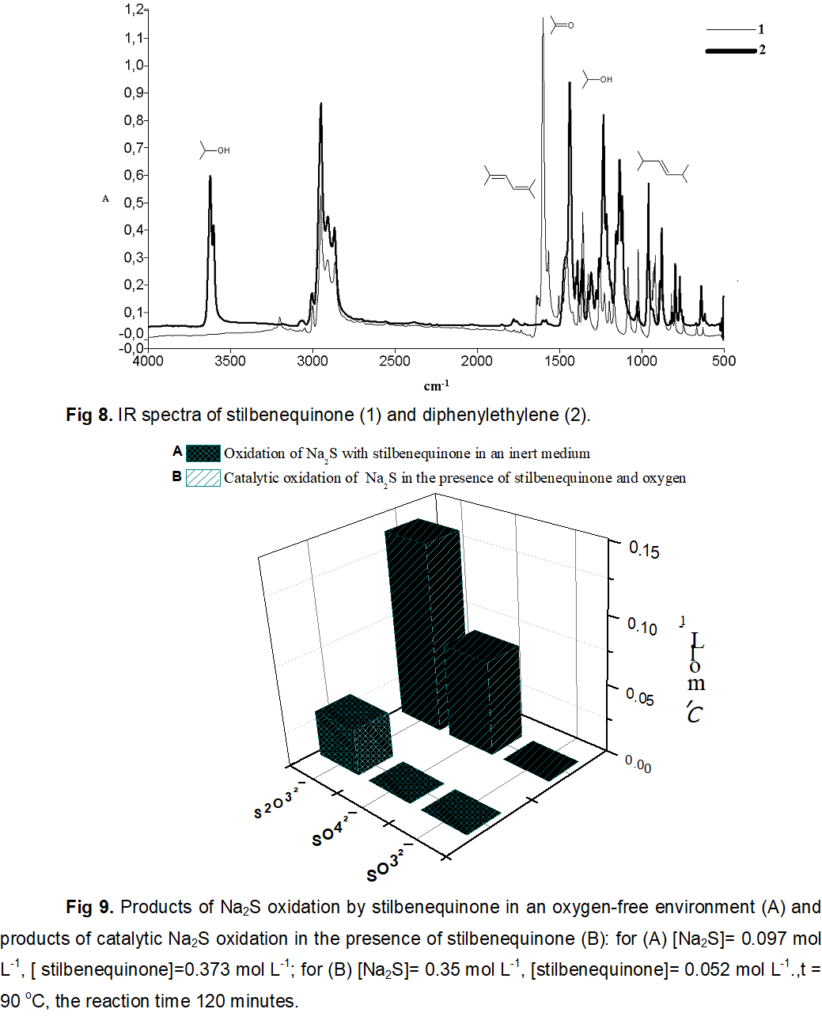